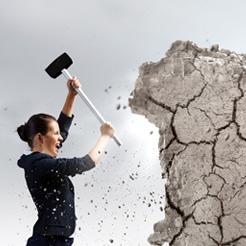 Data published to mark International Women’s Day reveals a mixed picture – while more women than ever before are on boards of the UK’s largest companies, the proportion of females on the senior rungs below the top level continues to lag behind their male counterparts

If progress matches the same gains made over the last three years then a third of board positions will be filled by women by 2020, meeting the target set by the government-backed Hampton-Alexander Review.

Business minister Andrew Griffiths said: ‘International Women’s Day is about celebrating women’s achievements and I am delighted to see that a record number of our largest companies’ board positions are now filled by women.

‘There has been a lot of progress in recent years with high-flying women breaking down barriers to more than double the number of women on FTSE 100 boards but there is still a lot more to do to ensure that women are not held back in the workplace.’

This is confirmed by Grant Thornton International’s annual Women in Business report. This found significantly more businesses around the world (75% in 2018 vs 66% in 2017) now have at least one woman on the senior management team, but the proportion of the team that is female has slipped from 25% to 24%.

Sacha Romanovitch, CEO, at Grant Thornton UK, said: ‘While it’s hugely positive that women are in senior roles at more businesses, it’s disappointing that they are being spread so thinly. Business needs to focus on the vital role leadership and culture can play in creating real progress in gender balance.

‘We have learnt that initiatives to fix women into the existing way business operates miss the real opportunity of diversity in the workplace. When we focus on creating inclusive environments based around shared purpose and collaboration we start to see a shift.’

However, the data shows no clear correlation between which, and how many, policies businesses have in place and the gender diversity of their senior management teams. No single policy seems to drive gender diversity, and the regions in which businesses have most policies in place – Africa, the EU and North America – demonstrate very different levels of gender diversity in business leadership. Companies say they are motivated to introduce gender equality policies primarily to attract and keep employees (65% globally and 82% in the UK) and to live up to organisational values (65% globally and 82% in the UK). More than half (52%) of UK respondents suggested there are no barriers that prevent gender equality practices being introduced.

Romanovitch said: ‘It’s clear that simply introducing policies is not enough to drive real progress on gender and indeed wider diversity. Businesses who are succeeding are those whose policies and practices are rooted in a genuine conviction of the benefit of diversity.’

ACCA is also calling for business leaders to show real and measurable progress on diversity and social mobility issues, as it marks International Women’s Day.

Helen Brand, ACCA’s chief executive, said: ‘2018 is a landmark year for women – it’s the 100th anniversary of some getting the vote in the UK, and also the 40th anniversary of the phrase “glass ceiling” first being used by consultant Marilyn Loden.

‘Looking forward, if there’s one area where I wish to see sustained progress, it’s to ensure career ladders breakthrough the glass ceiling for women. We have to take a wider view and seek progress on social mobility - unequal access to opportunities still exist for many women and men.’

ACCA says employers and their recruitment strategies are part of the success equation for diversity. Brand said: ‘The tone clearly has to be set from the top, with a transparent culture that’s committed to diversity. We have to measure this progress too – after all, what’s not measured can’t be managed’.

Grant Thornton Women in Business beyond policy to progress report is here.

Women at the top: you've got male

Four in 10 FTSE 100 board directors are women

Third of FTSE board positions held by women