Women on FTSE 100 boards ‘symbolic’ only 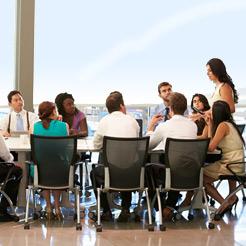 The number of women on the boards of the UK’s biggest companies has hit an all-time high, according to the latest annual report on the subject from Cranfield University’s School of Management.

This year’s report looked ‘beyond the numbers’, analysing the age, nationality, ethnicity and educational backgrounds of female board members and comparing age and tenure to that of their male counterparts. It warns that many companies are appointing women for symbolic value, rather than adopting a truly diverse model.

The research shows women serve shorter tenures than men, and are less likely to get promoted into senior roles. The average tenure for female executive directors on FTSE boards is 3.3 years – half that of their male counterparts, who, on average, serve 6.6 years.

The gap is slightly less at non-executive director (NED) level, with the average tenure being five years for men and 3.8 years for women. Just 16% of women have been in an NED role for more than six years, raising the question of if they are choosing to leave or being pushed off the board.

Sue Vinnicombe, professor of women and leadership at Cranfield University and lead author of the report, said: ‘There has clearly been great progress on the numbers front but scratch beneath the surface and we suggest that some companies have simply been ticking a box.

‘There is mounting evidence that women have shorter tenures and are less likely to be promoted into senior roles than their male counterparts. The number of women in chair roles has decreased this year.

‘We need urgent action to make sure that women are being… recognised for their contribution, and not simply for symbolic value.’

Almost half (48) of the FTSE 100 companies have reached the target of 33% women on their boards. Kingfisher and Rightmove both have 50% female representation at board level, and Schroders is the most improved company in the top 10, with 45% women on its board, up from 27% in 2018.

As regards wider diversity characteristics on the FTSE 100, just 11% of women on boards are from BAME backgrounds. The majority of female directors are British (55%), with the remainder coming from 18 countries across the world.

There is a high degree of financial literacy as 55% have held financial roles across finance, auditing, investment, treasury and banking, and 13% of women directors hold a recognised financial qualification, something often associated with the criteria for a NED appointment. Getting on for a quarter (22%) hold an MBA degree, in which finance is a core subject.

Cranfield’s research found the average age of female directors is 57.3, approximately two years younger than male directors, whose average age is 59.2. The gap is slightly larger for NEDs – 57.9 for women and 61.5 for men.

Vinnicombe said: ‘Given that many women take career breaks to have children, it is surprising that the age gap is not the other way around, and this may indicate that mature women are being overlooked for appointment to NED roles.’

Stephen Haddrill, chief executive of the Financial Reporting Council, which is supporting the report, said: ‘Diversity at board level, and at all levels of the workforce, adds real value to business culture and the bottom line.

‘While I welcome positive progress at some of the UK’s largest companies in appointing more women to board level roles, it is clear more needs to be done to promote diversity across all levels of FTSE companies. Current efforts need to be reinforced.’

The Female FTSE Board Report is here: https://www.cranfield.ac.uk/~/media/files/the-female-ftse-board-report-2019.ashx