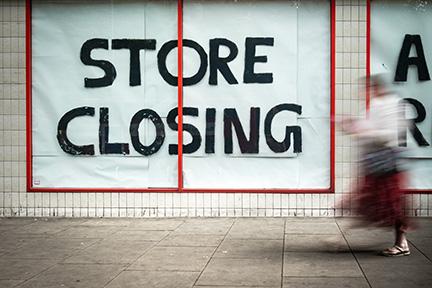 The economy is in a technical recession after Quarter 2 (April to June) 2020 saw a record fall of 20.4%, following a significant shock since the start of the coronavirus pandemic

The Office for National Statistics (ONS) said it is clear, that the UK is in the largest recession on record.

Quarter 2 2020 is now 22.1% below Quarter 4 (Oct to Dec) 2019, which is more than three times greater than the total fall during the next largest period of recession, which occurred during the global economic downturn 11 years ago of 2008 to 2009.

Howard Archer, chief economic advisor to the EY Independent Treasury Economic Model (ITEM) Club, said: ‘Every sector in the UK economy saw a quarter-on-quarter fall in output per hour in the second quarter. Construction saw by far the largest fall of 11.4%, followed by services (2.5%) non-manufacturing production (0.5%) and manufacturing (0.3%).

‘However, the ONS reported that the results on a sector level mask much larger changes in the constituent industries. By far the most significant fall in output per hour was in the hotels and catering industry. Productivity in this industry decreased by 74.7%. The second largest fall was in transport equipment manufacturing, which fell by 34.4%.’

Analysis of the ONS Monthly Business Survey (MBS) returns and external data, including comments from over 10,000 businesses, has shown that businesses are increasing output as demand has increased following the easing of social distancing and lockdown measures; businesses are striving to maximise output while working within official guidelines.

Services experienced widespread growth in June 2020, where the easing of lockdown measures, most notably in England, had the most positive impact, with nearly half of growth from the wholesale and retail trade; repair of motor vehicles and motorcycles sector.

Manufacturing and construction saw widespread growth during June 2020, primarily because of increased demand and the recommencement of work, as businesses managed to operate while adhering to social distancing measures.

Ulas Akincilar, Head of Trading at the online trading platform, INFINOX, said: ‘In the grim league table of Covid-inspired economic decline, the UK has emerged as a global contender.

‘The British economy is shrinking far faster than its European counterparts. Output fell more sharply in Britain than even Spain in the second quarter, and the UK’s rate of decline is double that of Germany.

‘With consumer demand so fragile and millions of furloughed workers at risk of losing their jobs in the coming months, no-one should expect Britons to spend their way out of recession.

‘The UK’s recovery is likely to be long and hard, and the strength of UK equities is looking strangely out of kilter with the pain on Britain’s high streets.’

Coronavirus and the impact on output in the UK economy: June 2020