The UK has overtaken Japan as the most expensive location to send expatriates, despite salaries remaining static, because of increases in tax and essential costs, including housing

Tax liability, housing rentals and school fees, now make up 82% of the overall package, according to research by global mobility experts, ECA International.

Oliver Browne, remuneration manager at ECA International, said: ‘The value of an average pay package for an expat in the UK saw a huge increase in 2018.

‘The rise of £44,688 was primarily down to a major jump in the cost of benefits that companies provided their overseas workers with, such as rental costs and international school fees.

‘As the cost of expat-standard housing and rental prices increased throughout the UK, the value of benefits provided by a company to cover these costs therefore rose significantly by £23,881 on average.’

After the UK, Switzerland is the second most expensive country in Europe for expat packages costing companies an average of £178, 260. However, a large part of this is made up of the highest average cash salary in Europe, at £66,940 compared to £55,948 in the UK.

Browne said: ‘Swiss salaries are consistently towards the higher end of the scale but so are everyday costs in most Swiss cities. Despite the higher prices, high salaries in the country mean locals are still well-off compared to their European counterparts.

‘Because of low taxes and a smaller value of benefits needing to be provided by a company, it is still comparatively cheaper to send expat workers to Switzerland compared to the UK.’ 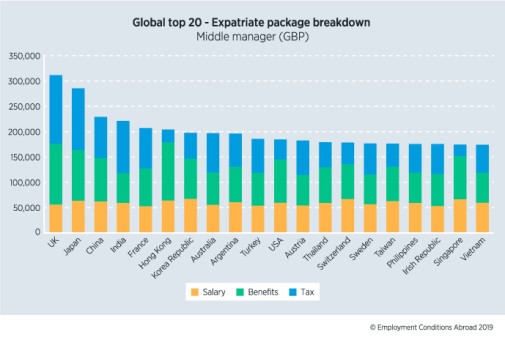 Elsewhere, Ireland saw a jump in the rankings and entered the top 20 most expensive locations to send expatriate workers. This was due to an increase in benefits costs, particularly rises in accommodation and rental fees.

Hiring expats in Ireland has become more expensive for companies despite average net salaries for expatriates dropping by 2% (€965/£852)) since last year. This was more than offset by an average rise of 14% (€8,820) in the cost of benefit provisions that companies had to provide their overseas staff.

ECA’s recent rental accommodation report revealed that rent in Dublin entered the top five most expensive in Europe for the first time, averaging €3,406 (£3,000) per month for a mid-range, three-bedroom apartment.

For expats looking for a pay boost, Saudi Arabia and the United Arab Emirates (UAE) continue to offer the best salaries, at £71,125 and £69,280 for mid-level expats respectively.

Browne said: ‘The Middle East has always offered extremely high salaries to overseas workers, and 2018 was no different. However, the benefits offered in these nations are not among the most costly for an employer, and the average value of benefits offered actually dropped in both locations last year, while the lack of any personal tax means that the overall package works out to be a lot lower when benefits and tax are both taken into account.’

Major tax reforms in the US meant average pay packages for expats fell by $4,445 (£3,522) to an overall total of $250,028, due to the major decrease in personal tax liability, while salaries and benefits both increased.

Browne said: ‘The personal tax rate has dropped by 14% on average, while the average expat net salary increased only slightly, by less than £1,000, meaning many companies will have found it a lot cheaper to relocate staff to the US last year.’

ECA’s analysis shows that in China, pay and benefits packages for expats had risen compared to a decline the previous year. The average package is now valued at CNY 1.9m (£226,000), an increase of 3% in local currency, pushing China into third place in the rankings after dropping in 2017.