UK exports likely to fall by 8% due to Covid-19 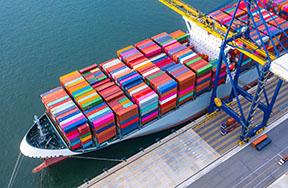 UK exports could see a hit of up to £50bn as a result of the global economic slowdown caused by Covid-19, according to new research by PwC

Exports could decline by around 6-8% in 2020 compared to last year, with future prospects dependent on both the pace of global economic recovery as well as the type of trade agreement the UK strikes with the EU following the end of the Brexit transition period in December.

Along with a fall in exports, the pandemic is likely to have a long-lasting impact on global trade and supply chains. Although the crisis has shown how trade has been essential to saving lives and livelihoods - from the supply of personal protective equipment and other medical equipment to food - the international trading system is likely to come under pressure by the forces of deglobalisation.

Jing Teow, senior economist at PwC, said: ‘The current crisis is likely to accelerate the current trend towards deglobalisation. The slowdown in global growth will weaken demand for traded goods and services.

‘Businesses that are focused on securing the resilience of supply chains are likely to increase the pace of reshoring or diversifying supply chains. Businesses will want to ensure that they are not dependent on one single country or region as a source of production inputs, as many global businesses found to their cost when Hubei in China was first struck down by the pandemic in December 2019.’

Teow added: ‘In addition, at least until a vaccine is found, restrictions on the movement of people and consumer uncertainty are likely to continue, which will have a long-lasting impact on the transport and tourism sectors.

‘Trade in business services, which is reliant on physical interaction may also come under pressure, but the adjustment of many businesses to remote working could diminish the importance of physical interactions in the future, which could lead to positive effects on the sector’s carbon footprint.’

The biggest percentage fall in goods export volumes compared to the previous year was observed in manufacturing, machinery and transport equipment, and beverages and tobacco.

However, chemical exports, such as medicinal and pharmaceutical products, were 18% higher than April last year, suggesting that Covid-19 has boosted the UK’s trade in healthcare commodities.

Due to social distancing measures and sector lockdowns, manufacturers have temporarily shut operations and are operating at reduced capacity, leading to a reduction in industrial production and export capacity globally.

But, although China’s industrial production fell by 19% between December 2019 and February 2020, over the past few months levels have almost recovered to pre-Covid-19 production levels.

A similar recovery is possible for countries such as Germany, the UK and Japan over the coming months, assuming that the peak impact has passed.