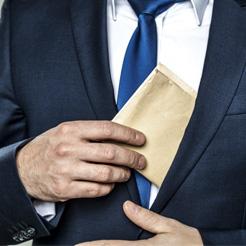 A bribery scandal surrounding FTSE 250 energy infrastructure specialist Petrofac has deepened, with a former senior executive pleading guilty to additional charges relating to corrupt payments made in connection with multibillion pound contracts in the Middle East

The Serious Fraud Office (SFO) has announced that as part of its ongoing investigation into Petrofac Ltd and its subsidiaries, David Lufkin, a British national and the former global head of sales at Petrofac, has pleaded guilty at Westminster Magistrates’ Court to three counts of bribery.

The offences relate to corrupt offers and payments made between 2012 and 2018 to influence the award of contracts to Petrofac in the UAE worth approximately $3.3bn (£2.4bn).

Lufkin pleaded guilty to his role in offering and making corrupt payments to agents to influence the award of an engineering, procurement and construction contract to Petrofac in 2013 (and a variation to that contract awarded in 2014) on the Upper Zakum UZ750 Field Development Project, and a front-end engineering design contract awarded to Petrofac in 2014 on the Bab Integrated Facilities Project, each located in Abu Dhabi.

Total payments of approximately $30m were made, or were due to be made, by Petrofac to those agents in connection with these contracts, the agency said.

These latest charges are in addition to eleven charges of bribery already brought by the SFO, to which Lufkin pleaded guilty in February 2019.

Lufkin is due to be sentenced at Southwark Crown Court on 11 February.

The SFO’s investigation into the activities of Petrofac, its officers, employees and agents for suspected bribery, corruption and money laundering continues.

Separately, the SFO has dropped an investigation it opened in 2017 examining suspicions of corruption in the conduct of business by British American Tobacco (BAT), its subsidiaries and associated persons.

The SFO said that following extensive investigation and a comprehensive review of the available evidence, it had concluded the evidence in this case did not meet the evidential test for prosecution as defined in the Code for Crown Prosecutors.