More global accountancy networks are reporting gender diversity numbers with 14 (56%) out of the 25 firms in this year's survey voluntarily providing a gender breakdown of their partner numbers as the number of female partners reaches an all-time high, reports Amy Austin

This year the fight for gender diversity and equality in UK companies was stepped up a notch with the introduction of mandatory gender pay gap reporting. This increased level of disclosure has resonated in firms globally and is evident in responses to this year’s survey, as 14 (56%) out of the 25 firms voluntarily provided a gender breakdown of their partner numbers. This compares to eight firms (32%) in 2017.

While it is commendable that more firms are willing to reveal female partner numbers, it is disappointing that big players such as EY, KPMG, BDO and Geneva Group International still do not. Deloitte, the top of this year’s table based on fee income, has 2,277 female partners, which equates to 18.7% of all partners, with PwC doing ever so slightly better at 18.8%, although both firms still have a long way to go to reach total equality.

Even though Praxity provides a gender diversity breakdown, the 569 female partners figure, out of a total of 3,682 partners, does not include female partner numbers from Mazars, one of the group's member firms, as it chooses not to disclose. However, numbers provided for Accountancy's Top 75 firms survey reveals that Mazars has 21 femal partners out of a total of 134 in 2017 in the UK.

So although gender diversity does appear to be improving, the firms still have a long way to go until they reach a 50:50 level.

Both PwC and KPMG have actively come forward and said that they will no longer accept all-male candidate shortlists for jobs in the UK to attempt to increase the number of women in senior roles. While this is a step in the right direction, more needs to be done to encourage and make women want to apply for senior roles across all firms. 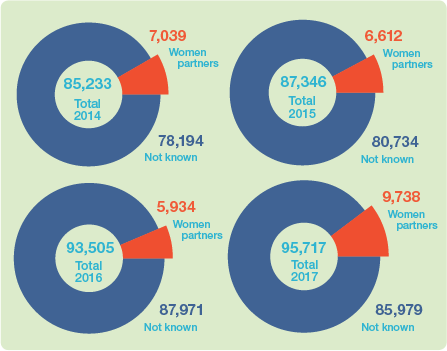 Click here for 2018 accounting networks and associations survey, including report and league tables