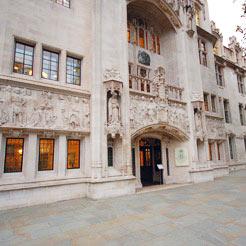 The Supreme Court has ruled in favour of a Southampton-based bra supplier who held that a mastectomy bra designed to be worn with an artificial breast form should be classed as an orthopaedic appliance and so exempt from import duty, overturning previous legal rulings which agreed with HMRC’s view that 6.5% duty was payable

The appeal concerned the appropriate customs classification of a mastectomy bra marketed under the name ‘Carmen’ and imported by Ameona from its parent company in Germany. The bra is designed to be worn with an artificial breast form by women who have undergone surgical removal of one or both breasts, typically following a cancer diagnosis. [Amoena (UK) Ltd versus the Commissioners for Her Majesty’s Revenue and Customs [2016] UKSC 41 On appeal from [2015] EWCA Civ 25].

The issue was whether the bra should be classified under the ‘Combined nomenclature of the European Union’ classification system (CN) as a brassière, thereby attracting duty at 6.5%, or as an ‘orthopaedic appliance’, ‘artificial part of the body’, or ‘other appliance… worn… to compensate for a defect or disability’, in which case there is no duty payable.

The First Tier Tribunal (FTT) held that it should be classified as a brassiere, attracting duty, a decision reversed by the Upper Tribunal (UT) but then upheld by the Court of Appeal.

Ameona took the case to the Supreme Court, which said that the factual findings of the FTT concerning the design features of the Carmen bra were not in dispute the issue was whether the bra falls under heading 9021 of chapter 90 of the CN classification system.

The judges referred to a Court of Justice of the European Union (CJEU) ruling in the Uroplasty case, which found that the intended use of the product may constitute an objective criterion in relation to tariff classification if it is inherent in the product and is capable of assessment on the basis of the product’s objective characteristics.

The Court of Appeal concluded with respect to ‘orthopaedic appliances’ that the reference in an explanatory note  to appliances ‘supporting or holding parts of the body following an illness, operation or injury’ does not encompass appliances supporting artificial body parts such as an artificial breast form.

The Supreme Court found that the Court of Appeal’s conclusion is consistent with the ordinary understanding of orthopaedics and legal opinion in the Uroplasty case. Under the sub-heading ‘appliance to compensate for a defect or disability’, at least one of the judges agreed with the Court of Appeal that it is the breast form which compensates for the defect or disability, and the bra is worn solely to keep it in place.

The final sub-heading considered is ‘artificial parts of the body. The Supreme Court found the issue is whether the bra is a ‘part’ or ‘accessory’ and ‘suitable for use solely or principally with’ the breast form, and so should be ‘classified with’ it.  The UT found in favour of Amoena on this point, but the Court of Appeal took the opposing view based on its interpretation of three CJEU cases, Turbon 1 (C-276/00), Turbon 2 (C-250/05), and Unomedical (C-152/10).

The Supreme Court said that the two Turbon cases, which dealt with ink-cartridges for printers, are of little direct help on account of having such different facts, but they provide guidance on the meaning of ‘parts and accessories’, which was treated as authoritative in Unomedical.

Unomedical, which concerned urine drainage bags, was of more direct relevance to the Ameona case, the judges said. What mattered to the CJEU in that case was that the bags played no direct part in the actual processes of either the catheter or the dialyser.

However, they said the reasoning of the CJEU in these three cases is difficult to translate to an artificial breast form, whose function does not depend on any mechanical or other active process. It is clear that the breast form is an ‘artificial part of the body’, but the bra itself is not. The issue therefore is whether it is a ‘part’ or ‘accessory’, and ‘suitable for use solely or principally with’ the breast form, and so to be ‘classified with’ it.

However, the Supreme Court found, on a natural reading of the guidance, the bra is an ‘accessory’ because it enables the breast form to perform its function, by holding it in place, and thus performs ‘a particular service relative to (its) main function’. On this basis, the appeal was allowed.

The Supreme Court judgment in Amoena (UK) Ltd versus the Commissioners for Her Majesty’s Revenue and Customs is here.