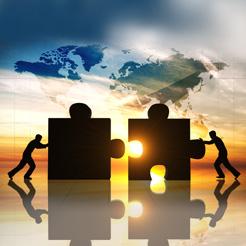 According to a joint statement, private equity specialist Warburg Pincus will co-invest in the combined business alongside existing investor Permira.

The statement said: ‘The revised transaction structure will result in a significant reduction in external debt for the combined group, lower ongoing financing costs and an improved regulatory capital position.’

Smith & Williamson, ranked at number 12 in the Accountancy Daily Top 75 firms annual survey, first revealed the merger plans in September last year, and suggested the new operation would be in place by early 2020.

However, at the beginning of this year, the firm reported the Financial Conduct Authority (FCA) had ‘raised a number of issues with the proposed transaction as currently structured’. There were then further delays caused by the disruption of Covid-19, which meant the companies applied for an extension to the original April stop date for a deal.

Now, subject to regulatory and anti-trust consent and the approval of Smith & Williamson’s shareholders, it is expected that completion will take place in the second half of 2020.

AGF, Smith & Williamson’s largest shareholder, will fully exit its investment in the group upon completion of the transaction.

The overall transaction value for individual Smith & Williamson shareholders will be the same as under the original agreement, when it was said to be £625m, through a combination of cash and shares. As before, Smith & Williamson’s management will be rolling the majority of their investment into the equity of the combined group.

The merged group will be known as Tilney Smith & Williamson and will be responsible for approximately £44bn in assets under management and is expected to generate around £530m.

Ranked by assets under management, Tilney Smith & Williamson is expected to be the fourth largest UK wealth management business and, measured by fee income, will be the sixth largest UK professional services firm.

David Cobb and Kevin Stopps, co-chief executives of Smith & Williamson, said: 'The rationale for merging Smith & Williamson with Tilney has been persuasive from the outset, given the complementary strengths of the two businesses and the benefits of scale the combination will bring.

The revised structure retains both these strategic benefits, as well as value for our shareholders, and delivers a more robust financial structure and a strong additional partner for the future in Warburg Pincus.

Under the terms of the original deal Stopps and Cobb were to join the board of the enlarged group upon completion. Will Samuel, current Tilney chair, was to become the chair with Tilney chief executive Chris Woodhouse becoming group chief executive.

Smith & Williamson revenues up 10% ahead of Tilney merger