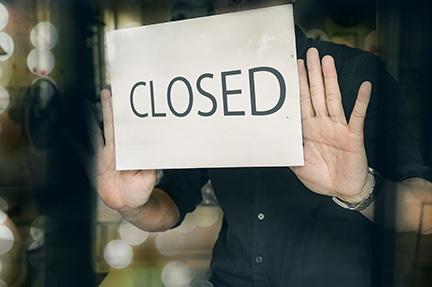 A flood of businesses are voluntarily closing down due to the economic uncertainty around covid-19 and fears over a possible increase in capital gains tax (CGT), according to analysis by Price Bailey

Price Bailey, ranking at number 29 in the Accountancy Daily Top 75 survey, said that it has seen a surge in enquiries from business owners in the past quarter looking to close down their businesses in an orderly way and take cash out.

In many cases,however, business owners are acting in haste and could take more cash via a tradesale or management buy-out.

The firm points out there has been speculation that CGT will be increased to a maximum rate of 40% as the Chancellor looks to shore up the public finances in the wake of the coronavirus pandemic.

Many businesses owners are currently eligible for Business Asset Disposal Relief, previously known as Entrepreneurs’ Relief. This reduces the amount of CGT they are legally required to pay when taking cash out of their businesses to 10%.

Matt Howard, partner at Price Bailey, said: ‘Many of these business owners are a decade or more before retirement age and their businesses are perfectly viable.

‘Closing them down in many cases will result in job losses, which will have a knock-on effect on the wider economy. There is a large ecosystem of potential buyers with cash to spend, and many of these businesses will have built up intangible value, such as goodwill, which will be lost if they simply cease to trade.’

He added: ‘Insolvencies in which the creditors pull the plug on businesses are at their lowest level in over a decade due to government support measures. It is therefore all the more ironic that so many business owners are voluntarily switching off the lights.’

Price Bailey said the mooted rise in CGT has spurred many business owners to accelerate plans to exit their businesses.

For viable businesses, however, a members’ voluntary liquidation is often the worst option. Historically low interest rates mean that debt is cheap for potential buyers, so a trade sale or management buy-out, are alternatives worth exploring.

‘There are plenty of available buyers that are able to access cheap debt to finance acquisitions,’ said Howard.

‘While high street banks are showing some reluctance to lend, alternative lenders have an appetite to finance acquisitions.

‘With the Autumn budget cancelled, we are unlikely to see an increase in CGT in the current tax year, which means that business owners have sufficient time to explore all the options alongside voluntary liquidation.’

‘Without it, we’d be in a very different situation – and a very grave one at that.'

Corporate insolvencies increased by 4% to 889 in November 2020 compared to October’s figure of 862, and were 41% lower than November 2019’s figure of 1,512, according to official government statistics.

Colin Haig, president of insolvency and restructuring trade body R3 and head of restructuring at Azets, also believes ‘The increase in corporate insolvency numbers in November has been driven by a rise in Creditors Voluntary Liquidations (CVLs)’.

However, he also said that: ‘Company Voluntary Arrangements (CVAs), Administrations and Compulsory Liquidations all fell compared to the previous month.’

‘Numbers of all types of personal insolvencies fell in November compared with October, leading to an overall month-on-month drop of over a fifth.

‘The fall compared with the same month last year is less precipitous, however, with more Individual Voluntary Arrangements (IVAs) registered last month than in November 2019.’

‘It is only a pronounced reduction in bankruptcies and Debt Relief Orders which meant there were 3% fewer individual insolvencies in November 2020 when compared with a year ago.

‘Despite the small monthly increase in overall corporate insolvencies, the statistics published today are not an accurate reflection of the state of the economy or the state of the UK business community.’

Haig added: ‘Businesses and individuals from Land’s End to John O’Groats have been affected by Covid-19 and the only reason this hasn’t shown up in the insolvency statistics yet is because of the extensive support the government has provided.

‘Without it, we’d be in a very different situation – and a very grave one at that.

‘That said, the extension of the furlough scheme and the temporary ban on winding-up petitions until the end of March will provide some reassurance to many businesses and their staff as we go into the Christmas period and the first quarter of 2021.’

Entrepreneurs’ relief used by 39% to reduce CGT in asset disposal