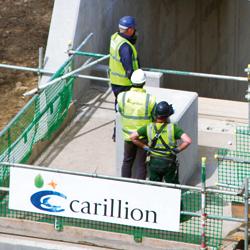 PwC has been appointed as the special managers to troubled outsourcing giant Carillion, which has announced it is going into compulsory liquidation with immediate effect, putting thousands of jobs and major government infrastructure projects, including the new HS2 high speed rail link, at risk

Last week Carillion reported it was in ‘constructive discussions’ with a range of financial and other stakeholders regarding options to reduce debt and strengthen the group's balance sheet.  Carillion said it expected that any agreement was likely to involve the raising of new capital and the conversion of existing financial indebtedness to equity which would result in significant dilution to existing shareholders.

This weekend saw crisis talks between the company, key financial stakeholders and government representatives, with Carillion asking for limited short term financial support, to enable it to continue to trade whilst longer term engagement continued.

This morning the company put out a statement saying these discussions have been unsuccessful, and the board concluded that it had no choice but to take steps to enter into compulsory liquidation with immediate effect.

Carillion said: ‘An application was made to the High Court for a compulsory liquidation of Carillion before opening of business today and an order has been granted to appoint the official receiver as the liquidator of Carillion.

Philip Green, chairman of Carillion, said: ‘This is a very sad day for Carillion, for our colleagues, suppliers and customers that we have been proud to serve over many years.

‘ Over recent months huge efforts have been made to restructure Carillion to deliver its sustainable future and the Board is very grateful for the huge efforts made by Keith Cochrane, our executive team and many others who have worked tirelessly over this period.

‘In recent days however we have been unable to secure the funding to support our business plan and it is therefore with the deepest regret that we have arrived at this decision.  We understand that the government will be providing the necessary funding required by the official receiver to maintain the public services carried on by Carillion staff, subcontractors and suppliers.’

As well as the HS2 contract, Carillion is the second biggest supplier of maintenance services to Network Rail, has a number of contracts across the UK for managing schools and prisons, and maintains 50,000 homes for the Ministry of Defence.

David Lidington minister for the Cabinet Office and Chancellor for the Duchy of Lancaster has announced the government will continue to deliver all public sector services following the insolvency of Carillion, and moved to quell public and employee concerns.

‘For clarity – all employees should keep coming to work, you will continue to get paid. Staff that are engaged on public sector contracts still have important work to do,’ Lidington said.

Those already receiving their pensions will continue to receive payment. A dedicated web page and helpline have also been set up for workers who may be concerned or have questions about their personal situation.

Lidington said: ‘It is regrettable that Carillion has not been able to find suitable financing options with its lenders but taxpayers cannot be expected to bail out a private sector company.’

At the beginning of January, Carillion said it has been notified that the FCA ‘has commenced an investigation in connection with the timeliness and content of announcements made by Carillion between 7 December 2016 and 10 July 2017,’ and said that the company is ‘cooperating fully with the FCA.’