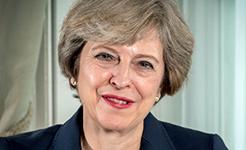 Prime Minister Theresa May’s speech to the Conservative party conference included a commitment to what she called a ‘new generation’ of council and housing association homes, plus long term social rental deals, as part of moves to address problems in the housing market, but had few details of any innovations designed to attract the business vote

May’s speech was itself plagued by difficulties, including a prankster handing her a P45 and a prolonged coughing fit. Much of it focused on her personal narrative and vision for the party, but the key announcements were on a review of mental health provision, affordable housing, a cap on energy bills and a review of student university fees and loans.

However, she only briefly mentioned Brexit and there was no discussion of any changes to the personal or business tax regime.

In the speech, the prime minister announced a further £2bn of funding for affordable homes, which she estimated would supply around 25,000 more homes at rents affordable for local people over the course of this Parliament.

The department for communities and local government (DCLG) subsequently stated that, as a result, the government’s affordable homes programme will increase from £7.1bn of public funding to £9.1bn, and the £2bn additional funding for affordable housing could lever in total investment by housing associations and councils of up to £5bn.

There are also plans for the government to set a long term rent deal for councils and housing associations in England.

Under the proposals, increases to social housing rents will be limited to the Consumer Price Index (CPI) plus 1% for five years from 2020. Previously, the government’s affordable housing policy primarily supported ‘affordable rent’ – rents of up to 80% of local market level – and low-cost home ownership. This announcement now extends support for ‘social rent’ – which are lower rents, set according to national guidelines.

The announcement on rent policy beyond 2020 will be reflected in a direction to the social housing regulator, which the government will consult on next year.

In a speech just prior to the Conservative conference Chancellor Philip Hammond announced an additional £400m of investment in transport to support the development of the northern powerhouse.

This is made up of £300m of extra funding for rail lines and £100m for 33 road schemes. Hammond said the aim is to enable faster services between the northern cities of Liverpool and Manchester, Sheffield, Leeds and York, as well as on towards the East Midlands and London.