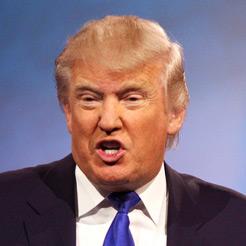 Donald Trump paid just $750 (£581) in federal income tax the year he became US president, and made no payments in 11 other earlier years, according to US news media reports

The New York Times says it has obtained details of the president’s tax returns, which Trump had previously failed to make public, despite all US presidents since the 1970s routinely doing so.

It also claimed he paid no federal income taxes in 11 of the 18 years for which it had data, largely because of offsetting business losses.

Trump has dismissed the paper’s claims as ‘fake news’ at a press briefing, and said he had ‘paid a lot in state income taxes’.

Alan Garten, Trump’s lawyer, said in a statement: ‘Most, if not all, of the facts appear to be inaccurate.

The paper also alleges that Trump is in dispute with the Internal Revenue Service (IRS) which dates back  a decade and relates to $72.9m tax refund he received. It says if he loses the claim, Trump could face a further $100m tax bill.

In an annual financial disclosure that he is required to make as president, Trump said he made at least $434.9m in 2018. The newspaper disputes this, alleging that his tax returns show the president had instead gone into the red, with $47.4m in losses.

The paper claims that while his TV career was lucrative, earning Trump around $430m, his other businesses including his golf courses and hotels, are running at a loss.

The two golf courses in Scotland and one in Ireland have reported a combined $63.6m in losses, it claims.

The New York Times data does not cover Trump’s tax returns for 2018 or 2019. His two most recent predecessors, Barack Obama and George W Bush, each regularly paid more than $100,000 a year in federal income taxes while in office.

The paper’s revelations come ahead of the first Presidential debates between Trump and his Democrat rival Joe Biden, scheduled later this week.