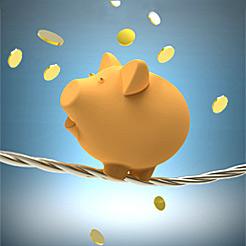 The survey results have raised fears that millions of mid-life employees are sleep walking into retirement. The fears are heightened over concerns that nearly two thirds of this age group do not understand what new pension freedoms will mean for their retirement plans.

A quarter do not even know when they will qualify for a state pension.

The dire situation has prompt calls for businesses to do more to encourage their workers to save and plan for their retirement.

Lindsey Rix, Aviva’s managing director of savings and retirement, said: ‘Millions of mid-life employees are flying blind, and fast, towards their retirement. At the same time these employees are calling upon their employers for help.

‘As a first step, mid-lifer employees who are mystified by their pension savings should try to get a clear picture of what they have saved so far and how much of an income this can provide them with over the course of retirement. For some, this may be a pleasant surprise, while for others, it could be the wake-up call that’s needed to spur them into action.’

The news comes after the Financial Conduct Authority (FCA) last month warned that 5m savers were at risk of falling for pension scams.

A survey of more than 2,000 adults aged 45 to 65 with a pension found 42% were at risk of falling for at least one of six common tactics used by pension scammers. These include pension cold-calls, free pension reviews, claims of guaranteed high returns, exotic investments, time-limited offers and early access to cash before the age of 55.

The likelihood of being drawn into one or more scams increased to 60% among those who said they were actively looking for ways to boost their retirement income.