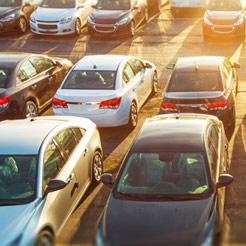 New car registrations fell 20% last month as the market felt the effects of the introduction of higher car tax rates for new cars valued at £40,000 plus from 1 April 2017, with people rushing to register cars before the deadline

In April 2017, 152,076 new cars were registered compared to 189,505 in April 2016, with alternatively fuelled vehicle sales down for the first time in 47 months as hybrid demand is hit by the higher vehicle excise duty (VED) rates.

From 1 April 2017, purchasers of new cars valued at £40,000 or over face a five-year charge in addition to the annual road tax rate, which is set on a sliding scale. For the first five years, car owners will have to pay a £310 supplement on top of standard VED. The aim of the measure is to encourage the purchase of ultra-low emission vehicles as first year rates of VED will vary according to the carbon dioxide emissions.

In March 2017 the car market experienced significant growth in car registrations as buyers brought forward purchases ahead of the switch to the higher VED rates.

Despite the substantial 20% fall in April, the overall new car market remains strong in the year to date, with new registrations in the first four months up 1.1% year-on-year to 972,092 – the highest level on record.

Mike Hawes, SMMT Chief Executive, said: ‘With the rush to register new cars and avoid VED tax rises before the end of March, as well as fewer selling days due to the later Easter, April was always going to be much slower. It’s important to note that the market remains at record levels as customers still see many benefits in purchasing a new car. We therefore expect demand to stabilise over the year as the turbulence created by these tax changes decreases.’

The bestselling car in April 2017 was the Ford Fiesta with 4,957 sold, followed by the Nissan Qashqai and Mercedes Benz C Class and A Class.

The new rates and bands for the post-2017 VED system are set out in the table below:

Squeeze on spending as retail sales fall by 0.5%