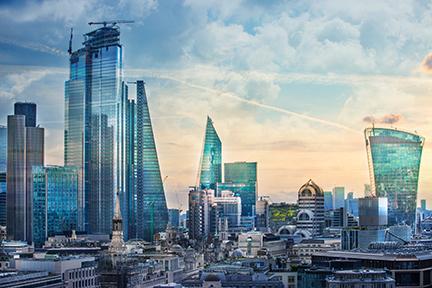 All 32 London boroughs, the City of London, and parts of both Essex and Hertfordshire, are to be under the strictest of the three levels of coronavirus restrictions from tomorrow, the government has announced

The move to tier 3 restrictions has been announced ahead of the planned nationwide review on Wednesday, in response to concerns about data showing an exponential rise in confirmed cases in these areas, necessitating emergency action.

Matt Hancock, health and social care secretary, said: ‘I know that this is difficult news. I know it will mean plans disrupted, and that for businesses affected, this will be a very significant blow.

‘So this action is absolutely essential, not just to keep people safe, but because as we’ve seen early action can help prevent more damaging and longer lasting problems later.’

All pubs and restaurants in tier three must close except for takeaway and delivery. Sports fans cannot attend events in stadiums, and indoor entertainment venues - such as museums, theatres, bowling alleys and cinemas - must remain shut.

Shops, gyms and personal care services (such as hairdressing) can stay open.

Those living in tier 3 cannot mix indoors, in private gardens or in most outdoor venues, except with their household or bubble, but can meet in a group of up to six in other outdoor spaces, such as parks, beaches or countryside.

The London boroughs, City of London and the named parts of Essex and Hertfordshire will be eligible for the ongoing rollout of community testing for those living under tier 3 restrictions to further tackle the spread of the virus, with further details to be set out shortly.

The government has already confirmed that a targeted testing drive had begun for secondary school and college students in parts of North East London, Essex and Kent, in a bid to minimise the disruption to education.

Peter Davies, client service partner at WMT chartered accountants, said: ‘It is extremely disappointing to see that hospitality businesses will again be forced to close their doors in what, for many, is the busiest trading period of the year and at such short notice.

‘Furlough aside, the levels of grants and support available is lower than in many other European countries. Not every otherwise-viable business will survive the move into tier 3 and many more jobs will be under threat.

‘Hospitality would be forgiven for wondering why it is bearing an unfair burden in the fight against covid compared to other sectors such as non-essential retail.’

Kate Nicholls, CEO of trade body UKHospitality, said: ‘There’s still no hard evidence that hospitality venues are a significant contributor for the spike in infections.

‘Cases were higher at the end of the last lockdown – during which hospitality was shut down – than at the start. The spread is being predominantly driven through schools – even the Mayor of London has pointed this out and called for schools to stay shut until January.

‘So many pubs, restaurants, bars, cafes and hotels, having invested so much to make their venues safe, are only just clinging on by the skin of their teeth, but will be forced to take another huge hit.

‘The burden of a region being moved into tier 3 falls almost exclusively on hospitality businesses. It is an illogical tactic that fails to tackle Covid effectively but does push businesses closer towards failure.

In Scotland, an independent economic impact study has suggested the viability of the hospitality industry and thousands of jobs could be significantly safeguarded by relatively minor changes to the Scottish covid restrictions policy.

Analysis by Biggar Economics found that adjusting opening hours by around two and a half hours and allowing alcohol to be served under strictly controlled conditions would increase hospitality business turnover from £419m to £1.1bn; increasing the number of jobs supported from the current 28,300 to 60,800; and securing the viability of 1,816 businesses.

UKHospitality Scotland (UKH Scotland), the Scottish Beer & Pub Association (SBPA) and the Scottish Licensed Trade Association (SLTA) are calling for the Scottish government to urgently implement the changes, arguing they would turn a £261m fiscal cost of subsidy into a £63m positive tax contribution.

Colin Wilkinson, SLTA managing director, said: “This would create a more sustainable environment for hospitality businesses beyond Christmas and ensure more of them survive the winter, continue to create jobs and play the positive role as part of the fabric of communities the length and breadth of Scotland.’

The first alternative policy scenario looked at extending closing times from 8pm to 10.30pm and allowing alcohol to be served with food in levels 1 to 3.This scenario supports £927m in turnover and 53,100 jobs; however, it represents a fiscal cost of £14m.

The second alternative policy scenario looked at also allowing wet-led pubs and bars that do not serve food to be open until 8pm in levels 1 to 3. This supports £1.1bn in turnover, 60,800 jobs, and a fiscal benefit of £63m.

The third alternative policy scenario looked at allowing all hospitality businesses to be open until 10.30pm and to serve alcohol. This supports £1.2bn in turnover, 65,400 jobs, and a fiscal benefit of £105m.

The report highlights that restrictions on the hospitality sector, as based on the levels in place across Scotland from 11 December, supported £419m in turnover and 28,300 jobs; however, it represents a fiscal cost of £26m.

The Scottish government’s previous restrictions, which ended on 11 December, supported £276m in turnover and 19,100 jobs and represented a fiscal cost of £347m.