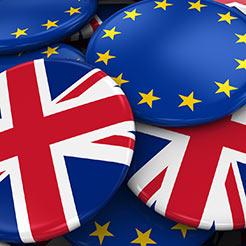 As the deadline for triggering Article 50 approaches, Sadiq Khan, the mayor of London, has criticised the threat from government ministers to turn the UK into a ‘low-tax, low-regulation, tax-haven economy’ if they are unable to reach a deal with the EU within two years

Khan cited Chancellor Philip Hammond’s February interview with the German newspaper Welt am Sonntag, in which he suggested Britain could transform its economic model into a corporate tax haven if the EU fails to provide it with an agreement on market access after Brexit.

In a new report about the impact of Brexit on London, Khan says that the government’s threat ‘would be truly disastrous for our country and for all Londoners’ and warns that ‘starting a race to the bottom would inevitably bring about a decline in our country’s prosperity and world standing’.

The report also warns of the dangers of falling back on basic World Trade Organisation (WTO) rules if a deal with the EU is not reached within two years.

Khan said: ‘The tariffs and barriers that this would place in the way of businesses would inevitably restrict trade with their largest market and significantly damage both London’s and the UK’s economy.’

He described the government’s stated aim of completing trade negotiations with the EU within two years of triggering Article 50 as ‘unrealistic’, and called on the government to prioritise securing an interim deal with the EU that secures access to the single market in order to avoid a ‘cliff-edge’ for British businesses.

The interim agreement will ‘define the UK’s temporary relationship with the EU while trade negotiations are completed, and the new relationship phased in’, Khan said.

While the mayor was positive about London’s strengths as a financial services and business centre, he sounded a warning about the potential problems if a clear Brexit plan is not announced soon.

Khan said: ‘London continues to command huge international confidence as the best city in the world in which to do business - as demonstrated by recent high profile investments by Google, Apple, Facebook and others.

‘But there is growing concern in the business community about the unnecessary uncertainty caused by a real lack of clarity on the government’s negotiating position. Some businesses including HSBC, UBS and JPMorgan are already beginning to move small numbers of staff from London to other European and world cities, and many more have announced contingency plans to do so over the coming months.’

The mayor of London’s London Brexit Paper is here.

Analysis - A race to the London Olympics bid