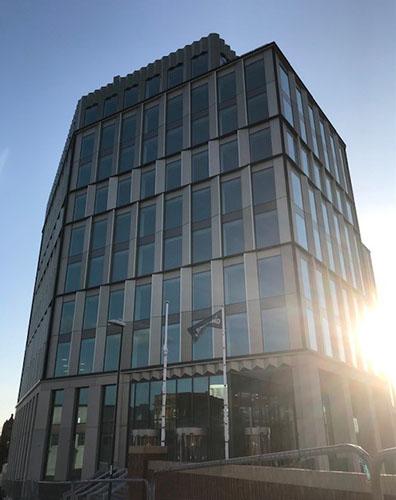 As part of HMRC’s national office restructuring, brand new offices in Nottingham are scheduled to open early next year and will accommodate around 4,000 government workers from HMRC and other departments

In early 2022, it is expected that around 4,000 full-time equivalent HMRC and valuation office agency employees will be based at the new 10-storey Unity Square hub, next to Nottingham railway station.

The new development was designed by Manchester-based architects 5 Plus and was built by Derbyshire-based contractor Bowmer + Kirkland.

HMRC has entered a 25-year pre-let on the Grade A office scheme on Queensbridge Road, with Peveril Securities and its joint venture partner Sladen Estates.

Work on the Unity Square office block started in 2019, and it will replace the agency’s current site in the city next to the canal in Castle Meadow Road.

Colin Casse, HMRC director of estates locations programme, said: ‘HMRC has a long-standing presence in Nottingham and the new government hub will be home to our Nottingham regional centre. Unity Square will provide a flexible modern working environment that can be adapted, should our ways of working change in the future. We look forward to working with Mace on delivering our future home in the East Midlands.’

The development of the regional centre in Nottingham was announced by HMRC in 2015 alongside the plans for HMRC to transform their estate from 170 offices, in 2015, to 13 regional offices, a further five transitional, nine specialist sites and a head office based in London.

Nottingham is leading the delivery of Phase 1 government hubs in regional areas across the country.

The office restructuring programme will help HMRC to achieve its savings targets. Moving to regional centres will save around £300m up to 2025 and the programme will deliver annual cash savings of £74m in 2025/26, rising to around £90m from 2028.