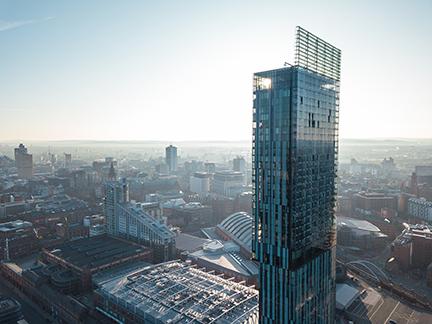 Greater Manchester leaders were unable to reach an agreement with government by midday, therefore Tier 3 ‘very high alert’ Covid restrictions will proceed without an agreement

Mayor of Greater Manchester, Andy Burnham, chose not to back down when Tier 3 restrictions were first imposed on Manchester last week as he felt they would be devastating for the livelihoods of hundreds of thousands of people.

Particularly affecting the low-income paying jobs such as pub workers and taxi drivers as the area has been under local restrictions since July.

Last week Burnham said that he wanted an 80% furlough scheme for the minimum wage, self employed income support set at 80% of an average monthly income, and he wanted an improved compensation scheme for businesses. These were their credentials for going into Tier 3.

Following previous talks between government and council leaders of Manchester, Andy Burnham and Sir Richard Leese, leader of Manchester City Council and Greater Manchester Health lead released a statement which said: ‘We had been encouraged by earlier discussions at an official level where the idea of a Hardship Fund, to top up furlough payments and support the self-employed, had been tabled by the government.

‘It was both surprising and disappointing when this idea was taken off the table by the Secretary of State.

‘We have written to the Prime Minister reiterating our willingness to continue to work towards an agreement but reminding him that Greater Manchester has been in Tier 2 style restrictions for almost three months, and that this has taken a toll on people and businesses here.

‘With this in mind, we do not believe it is in any way unreasonable for us to require better protection for our lowest-paid residents.’

The government put pressure on the local leaders of Manchester to enter Tier 3, claiming that Intensive Care Unit’s (ICU’s) are running low.

However, NHS doctors say this is usual for this time of year to see most of the beds filled up.

But now they need to deal with Winter Flu, Cancer and Covid patients as well, with a risk of being overwhelmed.

Burnham and Leese added: ‘we are disappointed that the government has today sought to raise public concern about the NHS in Greater Manchester with selective statistics.

‘Greater Manchester’s ICU occupancy rate is not abnormal for this time of year and is comparable to the occupancy rate in October 2019. Also, providing information about individual hospitals does not reflect that our hospitals work as a system to manage demand.

‘We are not complacent about the position in our hospitals and are monitoring the situation closely. But in the current situation, we believe it is essential that our residents are given clear, accurate information about the state of the NHS in Greater Manchester and that public fears are not raised unnecessarily.’

If a deal is not struck then the Prime Minister would decide on the next steps, said Communities Secretary, Robert Jenrick.

The Chancellor, Rishi Sunak, speaking at MPs questions in the House of Commons, said: ‘Greater Manchester is being treated exactly the same as every part of our United Kingdom, these are national support schemes that are put in place that help the most vulnerable in our society.

‘There are national schemes to protect businesses, employees and to provide support for local services.’

Local leaders had been pushing for the government to give £75m support in total, after ministers offered £22.4m for the implementation of extra measures along with an unspecified sum of business support.

When asked if the Chancellor feels these statistics are fair, Sunak said: ‘Yes, the support is £8 per head, that is the national formulae provided to all local authorities entering Tier 3.

‘That is the same that is provided in Lancashire and in the Liverpool City region.'

How businesses are affected

David Fort, managing partner of Haines Watts Manchester, said: ‘A move to Tier 3 however would be disastrous for businesses, especially in hospitality and would hit business and consumer confidence.

‘Businesses need stability and certainty. If they have that then it’s amazing how robust and agile our clients can be, but the government’s constant changes and negative stories in the press have damaged confidence, and patience is wearing thin.

‘Clients are just confused and angry and confused again. They are trying their best to adhere to the changing situation and make plans, but are exasperated by the government’s mixed messages.

‘If Greater Manchester moves to Tier 3, I can’t help concluding there is no master plan and it feels like the government is playing politics with people’s livelihoods and lives.

‘Are they really following the science any more? Where are the facts? Especially on hospitality who feel like scapegoats. The main impact on Tier 3 is on hospitality. If the science is that damning on an area, isn’t total lockdown the only possible solution?'