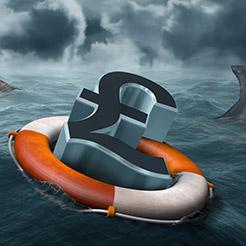 The government’s furlough scheme for jobs is likely to cost the government £30% less over the lockdown period than originally predicted, partly because many of the workers involved are part-time or lower-paid, the Office for Budget Responsibility (OBR) has found

In its initial analysis, the OBR estimated the coronavirus job retention scheme (CJRS) scheme grants issued would reach £84bn, assuming 4.5 months at a cost of £14bn a month and three months at £7bn a month.

The cost in the initial period was based on around 8m jobs being furloughed at a monthly cost of around £1,700.

However, it now appears that many grants are for lower amounts that expected. As of 31 May, over two months since full lockdown of the economy was imposed, 8.7m jobs had been furloughed at a cost of £17.5bn – giving an average grant of around £2,000 per job.

With the average claim to date estimated to cover somewhat less than two months, this translates to an average grant per job per month of around £1,200.

The OBR says this implies the average pre-virus weekly gross pay of the jobs that have been furloughed so far (excluding associated employer NICs and pension contributions) of around £320 – much closer to the median wage of part-time workers than for full-time workers.

This suggests that employers have concentrated their use of the scheme on furloughing employees whose pre-virus jobs involved significantly fewer hours and/or lower hourly pay than the average of all employees.

Based on this, the OBR has revised down its estimate of the gross cost of the scheme from March to July from £63bn to £43bn, and over the full period from £84bn to £60bn.

Looking at the separate scheme for the self employed, the OBR says that 2.5m claims had been made at a value of £7.2bn. This suggests that take-up is on course to rise to around 3m, as predicted.

However, at £2,880 the average payment under the self employed income support scheme (SEISS) is a little lower than the £3,000 expected, and has been declining over time. As a result, the OBR has reduced its estimate of the gross cost of the first grant from £10.5bn to £8bn, and estimates the second grant will  cost an additional £7bn, putting the overall cost of the scheme at £15bn.

Overall, the OBR says the direct impact of the government’s new policy measures to tackle Covid-19 on cash borrowing in 2020-21 is £132.5bn.

The OBR cautions that ‘given the pace at which the Treasury and other departments have developed these policies, we have not completed our standard iterative scrutiny processes to generate policy costings’, so its work draws on the Treasury’s published estimates for some measures and its own estimates for those that have not been costed.