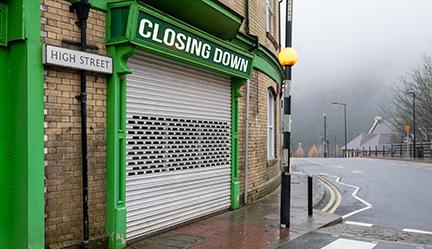 One in five businesses are financially stressed, with more than 1,000 companies in situations of acute distress

The worst affected areas are retail, hospitality and construction, caused by uncertainty around Brexit, rising employment costs and low productivity.

Blair Nimmo, head of restructuring at KPMG in the UK, said: ‘When we talk about “stress”, we typically mean companies which may have experienced instances of negative cashflow or working capital, defaulting on debt repayments or with a high debt-to-equity ratio.

‘Taken individually, all can be relatively manageable. However, an accumulation of such factors can indicate a company is veering towards distress – and possibly insolvency.’

Businesses have been hit by the years of uncertainty since the Brexit referendum in 2016 which has dampened investment and damaged business confidence.

Nimmo added: ‘Prolonged uncertainty around Brexit, as well as the re-introduction of import tariffs at key routes in the global supply chain have caused fierce headwinds for the industrial manufacturing base.

‘Couple this with a move towards alternative and sustainable packaging in certain sub-sectors, deferred capex investments, higher input costs and low productivity as a result of skills shortages, and it is clear to see why many of our industrial manufacturers are experiencing financial stress.

Other particularly vulnerable sectors flagged in the report were consumer finance, utilities and healthcare.

Nimmo said: The UK’s consumer finance sector is in the midst of a significant shake-up as increased regulatory pressure and mis-selling scandals have pushed under-capitalised businesses to the brink.’

KPMG’s restructuring practice analysed the filings of businesses with revenues in excess of £10m over the five-year period, which grew from around 22,000 in 2014 to 27,000 companies in 2018.