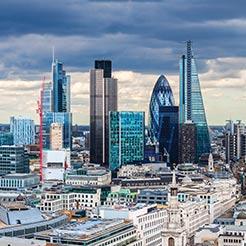 The UK’s financial services sector contributed a record £75.6bn in tax in the year to March 2020, according to a new report published by the City of London Corporation

The period covered significant uncertainty about the UK’s relationship with the European Union. This contribution remained stable compared to the previous year’s figure of £75.5bn.

The sum, which amounts to over 10% of the overall government tax receipts, comprises £34.1bn in taxes borne directly by firms and of £41.5bn in taxes collected from financial services employees and customers.

Despite the economic impact of the Covi-19 pandemic, the sector’s total tax contribution is expected to remain robust according to the projections made in the report. It estimates that in the current financial year ending in March 2021, the sector will pay between £71.1bn and £75.7bn in taxes.

The Total Tax Contribution of UK Financial Services, produced for the City of London Corporation by accounting firm PwC, highlights the resilience of financial services in the pandemic and finds that, compared to others, the sector has been less affected by decreases in economic activity or hours worked. This is due in part to the sector’s investment in recent years in technologies that enable remote working.

This resilience has allowed financial services to support other businesses, with almost one in two trading businesses having received some form of financial assistance. The UK financial services sector has also supported the wider economy in the pandemic by administering large numbers of government loans and granting nearly two million mortgage payment deferrals to households, equivalent to one in six mortgages in the UK.

The report also highlights the value of financial services across the country, with the sector employing over one million people across the UK, accounting for around 3% of the UK workforce, but contributing to over 11% of all UK employment taxes.

Employment taxes make up the largest share of the sector’s tax contribution (45%) because of the many skilled jobs the sector provides, followed by corporation tax and VAT (15% each).

Policy chair at the City of London Corporation, Catherine McGuinness, said: ‘This report highlights the value of the UK’s financial services sector, which has shown incredible resilience despite unprecedented economic uncertainty.

‘While the pace and path of the recovery post-pandemic might still be uncertain, the financial services sector’s contribution provides a much-needed element of stability. The sector is vital to supporting prosperity right across the country and will play a critical role in fuelling our economic success. Two thirds of jobs in financial services are outside of London so it has a vital role to play in driving the UK’s economic recovery, particularly through employment taxes.

‘However, technological advances and new ways of working mean the sector must focus on accelerating the change to digitisation and develop new products. This will be crucial for the UK to remain competitive and safeguard the sector’s jobs and significant tax contribution.’

‘We need to ensure that we have a tax system that supports growth in the sector, allowing it to contribute to the economic recovery following the pandemic, while generating tax revenue in a sustainable way.’

The City of London Corporation is the governing body of the Square Mile.

A separate report by economics think tank, the Centre for Economics and Business Research (CEBR), commissioned by the mayor of London, Sadiq Khan, revealed that Brexit will potentially cost London’s economy £9.5bn a year – with the capital’s service sectors bearing the brunt of the downturn.

The Brexit trade deal that came into force on January 1 ensured that goods travelling between the UK and EU will not face tariffs or quotas.

British businesses in the services sectors however now face major barriers to doing business in the European Single Market and have to comply with varying rules across member states, together with additional red tape.

Services industries – which include financial and professional services, law, creative, technology and hospitality sectors - contribute 80% to the UK’s economy. London, meanwhile, accounts for 40% of the UK’s exports in services.

The CEBR analysis sets out the initial effects on London’s economy of the reduction in trade with the EU as a result of the Brexit agreement and shows a potential annual loss of £9.5bn of gross domestic product (GDP).

London’s financial and professional services sector alone is set to account for more than £2bn in lost GDP per year.

The Mayor is particularly concerned about the government’s failure to secure a wider raft of agreements on regulatory equivalence, which would allow UK financial sector firms to continue providing specific products and services to clients in the EU. As a result, the UK financial sector currently benefits from fewer equivalence decisions than its counterparts in the US, Japan and other major trading centres.

The Mayor of London, Sadiq Khan, said: ‘London is a world leader in finance, law, professional services, the creative industries and technology.

‘However, whichever way you slice it, the government’s Brexit trade deal was the equivalent of a “no deal” Brexit for financial and professional services, and our businesses now face a costly red tape mountain caused by the UK having to trade with the EU as a “third country”.

‘The service sector is absolutely crucial to serving the wider economy – contributing billions in tax revenues to the Treasury every year, which goes towards funding public services in every village, town and city across the country. That’s why it is vital that the government quickly closes the gaps in the trade deal for key sectors of our economy.’