The number of graduates, school leavers and apprentices on trainee contracts at the leading UK accounting firms is up 4% year on year to nearly 20,000, although the longer term outlook is less positive as firms expect to reduce the size of the trainee intake next year

Accountancy Daily’s Top 75 Firms trainee survey found that there are currently 19,887 trainees studying to become a qualified accountant, tax adviser or consultant at top accounting firms. This is a 4% increase on last year’s survey, which recorded a total of 19,120 trainees across the firms.

The annual survey has revealed some shifts in trainee levels at the top end of the market across the Big Four firms.

These four firms alone account for 12,884, just under two thirds (63%) of the overall market, and any changes in trainee numbers could affect companies looking to recruit qualified accountants and other professional advisers into their ranks.

The trainee market may be slowing slightly but overall there has been a significant rise in trainees over the last five years from 13,404 total in 2013 to the current 19,887, equivalent to a 49% increase in numbers over the period. 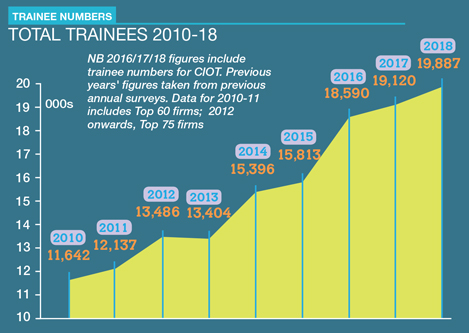 Beyond the Big Four, the next six firms in Accountancy Daily’s Top 75 survey currently account for more than 3,000 trainees. A further 1,500 are employed among the lower half of the top 20. Both Grant Thornton and BDO are reporting an increase in trainee numbers, up 26% and 12% respectively.

‘Student recruitment is the bread and butter of the firm,’ says PwC’s head of student recruitment Louise Farrar. ‘We will be taking on 1,300 graduates and 200 school leavers for this coming year, with about 60% of those roles outside London. And we have seen large growth in opportunities around technology.’