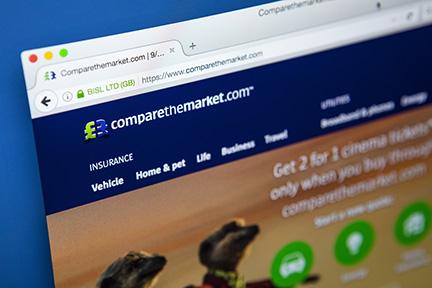 Online price comparison website ComparetheMarket has been fined £17.9m after the regulator found that clauses used in its contracts with home insurers breached competition law and may have resulted in consumers paying higher premiums

An investigation by the Competition and Markets Authority (CMA) has concluded that, between December 2015 and December 2017, the ComparetheMarket breached competition law by imposing wide ‘most favoured nation’ clauses on providers of home insurance selling through its platform.

These clauses prohibited the home insurers from offering lower prices on other comparison websites and protected ComparetheMarket from being undercut elsewhere.

They also made it harder for ComparetheMarket’s rivals to expand and challenge the company’s already strong market position as other price comparison websites were restricted from beating it on price.

As a result, competition between price comparison websites, and between home insurers selling through these platforms, was restricted. The CMA found that this is likely to have resulted in higher insurance premiums.

Rival comparison sites were restricted in gaining a price advantage over ComparetheMarket, for example, by lowering their commission fees to encourage those insurers to quote lower prices on their platforms.

The competitive pressures ComparetheMarket itself was subject to were weakened. Without the clauses, it would have had to compete harder to get lower prices from the home insurers, for example by reducing the commission fees it charged.

Michael Grenfell, the CMA’s executive director for enforcement, said: ‘Price comparison websites are excellent for consumers. They promote competition between providers, offer choice for customers, and make it easier for consumers to find the best bargains.

‘It is therefore unacceptable that ComparetheMarket, which has been the largest price comparison site for home insurance for several years, used clauses in its contracts that restricted home insurers from offering bigger discounts on competing websites – so limiting the bargains potentially available to consumers.’

ComparetheMarket was set up in 206 and is part of the BGL Group. The financial services company said in a statement that it was ‘disappointed with the CMA's decision and did not recognise its analysis of the home insurance market.’

The statement said: ‘We fundamentally disagree with the conclusions the CMA has drawn and will be carefully examining the detailed rationale behind the decision and considering all of our options.’

The Chapter I prohibition in the Competition Act 1998 prohibits agreements and concerted practices between businesses which have as their object or effect the prevention, restriction or distortion of competition within the UK.

Any business found to have infringed these prohibitions can be fined up to 10% of its annual worldwide group turnover, taking into account a range of factors including the seriousness of the infringement and any mitigating or aggravating factors.