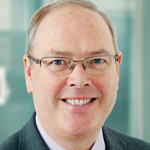 Andrew Sentance is senior economic adviser to PwC. He joined the firm in November 2011 after serving as an external member of the Monetary Policy Committee of the Bank of England.

After studying at Cambridge and the LSE, he started his career as a business economist at the Confederation of British Industry in the mid-1980s before moving to the London Business School in 1994. While at the CBI, he was a founder member of the Treasury’s Panel of Independent Forecasters -  also known as the 'seven wise men'. Immediately before joining the Bank of England, Sentance was chief economist at British Airways, where he also worked on business strategy and planning, airport policy, airport regulation and environmental affairs.

He is a part-time Professor at Warwick Business School, a visiting professor at Royal Holloway, London, and is a fellow and former chairman of the Society of Business Economists.