Amount of late self assessment penalties falls to £75m

The number of taxpayers missing the deadline for self assessment returns has fallen dramatically over the last three years reducing penalties issued by HMRC to £75m in 2018 as 10.7 million taxpayers submitted their return by 31 January deadline

Failure to file a return by the 31 January deadline immediately triggers an automatic £100 fine with further fines to follow for continued non-payment, escalating to a £10 daily penalty after three months. HMRC issued £75m of fines in 2018 for late filing, down from £89m in 2015.

Last year, HMRC reported that 9.9m taxpayers – meaning more than 92.5% of total returns – were filed online, from a total of 10.7m completed forms. Flying close to the 31 January D-Day, 7% of taxpayers – 758,707 people – completed their return on the day of the deadline thus avoiding an automatic £100 penalty.

From 2015 to 2016 there was a drop of 20,000 fewer late returns, according to analysis by the Association of Accounting Technicians (AAT), increasing to another 30,000 fewer from 2016 to 2017. There was then an even sharper drop of 94,000 from 2017 to 2018. HMRC’s move towards greater digitisation and plans to prepopulate self assessment tax returns via HMRC’s new Digital Tax Accounts should also help to reduce the level of non-compliance. 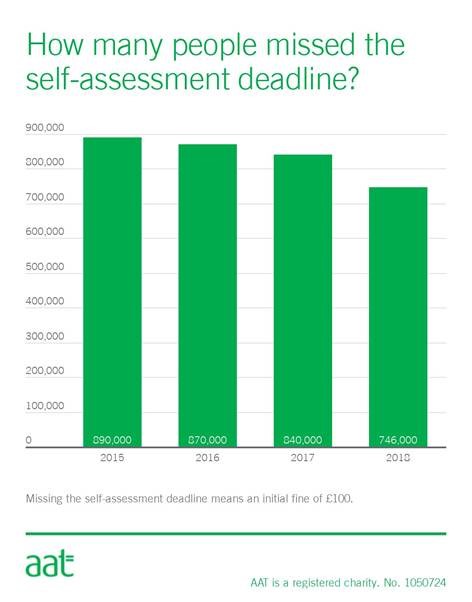 Brian Palmer, tax policy advisor at AAT, says: ‘There really is little excuse for filing a late tax return. The best advice that I can offer is that those who need to complete a self-assessment return should start working on it sooner rather than later.

‘By extrapolating the decline in late returns continuing at its current rate, it is possible to imagine a utopian position where the number of late returns could fall to zero within the next few years.

‘The number of late returns declining is due to HMRC’s continuing efforts to make the process easier and simpler. In the longer term the introduction of Making Tax Digital, and the discipline to file quarterly updates, could also help businesses and individuals to get in a mindset of filing on time. Especially as HMRC’s systems will inevitably send reminders to people in advance of when their return is due.’

The Low Incomes Tax Reform Group (LITRG) is also urging taxpayers not to miss the 31 January deadline and points out that HMRC figures show almost half (4.8m) of last year’s 10.3m full self assessment tax returns were received in the month of January 2018. Of this, 2.3m related to self-employment or business partnerships.

LITRG also points out that the introduction of the new trading allowance could benefit many self employed on low incomes because it may simplify the entries on their tax return or it could mean that they no longer need to submit one.