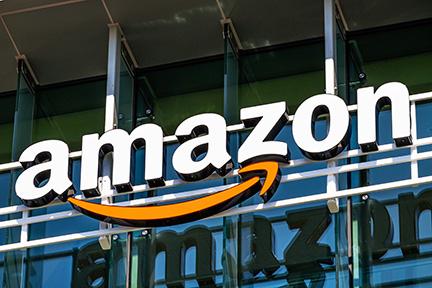 Online marketplace Amazon is to increase fees for UK sellers next month by 2%, in response to the introduction of the UK’s digital services tax (DST), in a move which is likely to increase costs for small businesses and traders who use the platform

The US company’s fee hike follows a similar decision last year after the introduction of a 3% DST in France, when sellers there saw their fees raised by the same amount.

At the time, Amazon said of its French decision: ‘We are not in a position to absorb an additional tax based on revenue rather than profit.

‘This tax is aimed squarely at the marketplace services we provide to businesses, so we had no choice but to pass it down to selling partners.

‘We recognize that this may place small firms in France at a competitive disadvantage to their counterparts in other countries.’

Now, in a communication with its sellers in the UK, Amazon said: ‘Earlier this spring, the UK government introduced a digital services tax.

‘While the legislation was being passed, and as we continued our discussions with the government to encourage them to take an approach that would not impact our selling partners, we absorbed this increase.

‘Now that the legislation has passed, we want to inform you that we will be increasing referral fees, fulfilment by Amazon (FBA) fees, monthly FBA storage fees and multichannel fulfilment (MCF) fees by 2% in the UK to reflect this additional cost.

‘We will not apply the increased charges retroactively, but starting 1 September 2020, the fee types listed above will increase.’

The UK’s DST came into operation from 1 April 2020. It is a 2% tax on the revenues derived from UK users of social media platforms, search engines and online marketplaces and applies to revenue earned from that date.

France and the UK went ahead with their own DST legislation after global discussions as part of the OECD’s base erosion and profit shifting (BEPS) project seemed to be stalling, describing this as a temporary measure pending international agreement on taxing the digital economy.

At the end of last year, the US warned it might levy 100% trade tariffs on up to $2.4bn (£1.85bn) of French goods, including cheese and champagne, in response to a federal investigation which concluded that France’s DST discriminated against US companies.

Subsequently the two countries agreed to hold back on any new tariffs before the end of 2020, to allow time for continued discussions within the OECD group of countries.

However, in June this year the US launched an investigation into DSTs which are either in preparation or in use in Austria, Brazil, Czech Republic, EU, India, Indonesia, Italy, Spain, Turkey, and the UK.

Robert Lighthizer, the US trade representative (USTR), said: ‘President Trump is concerned that many of our trading partners are adopting tax schemes designed to unfairly target our companies.

‘We are prepared to take all appropriate action to defend our businesses and workers against any such discrimination.’

Miles Dean, head of international tax at Andersen in the UK said: ‘It should come as no surprise that Amazon is passing the cost of this new tax onto its customers.

‘It might not be fair but Amazon won't be the only online company to be passing this cost on - the article even states that some of the retailers are passing the cost on to their customers.

‘Any prudent business would do the same, especially a listed company whose stakeholders would expect the cost to be passed on.’