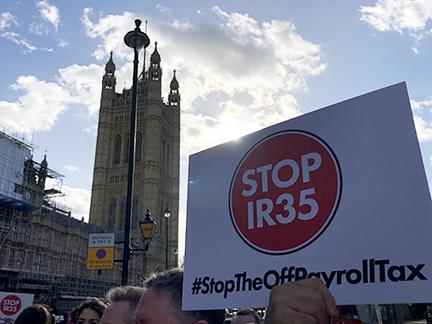 The #StoptheOffPayrollTax demonstration, trending on Twitter, was organised to campaign against the rollout of off-payroll rules to private companies.

Over 300 campaigners gathered outside parliament to protest IR35 rules that will effectively bring the majority of contractors into income tax and national insurance contributions (NICs) for the first time from 6 April 2020.

Supporter of the campaign, Chris James, head of accountancy at JSA Group and chair of the Freelancer and Contractor Services Association (FCSA), said: ‘I am here because I have some clients in this group of people that are protesting. I sit on the IR35 forum which is a group that meets regularly with HMRC and the Treasury to discuss how this law is developed.

‘My client’s roles are being ended as a result of this law coming in, and for some end users, instead of complying with the law they are just banning the use of freelancers working through personal service companies all together.

‘For some of my contractors, their work is going offshore and that is definitely not going to raise any more tax for HMRC.

‘I am not against IR35 reform overall but this rule is being rushed and it is bad timing as the UK pushes through the uncertainty of Brexit.’

Speaking at the demonstration, Labour MP Ruth Cadbury said: ‘Those of you who have spoken to HMRC, if you are given answers they are often different from the last time they gave an answer to the same question.

‘Put all that together and what you have is people in key skill areas leaving the country and leaving the profession as they are having to put up with vastly cut income.

This does not just affect you, it affects all of us because your skills are crucial to our economy and we already have enough threats to our economy with Brexit.’

Speaking to Accountancy Daily, campaign leader, Dave Chaplin, CEO and founder of ContractorCalculator said: ‘They are planning on introducing legislation that will treat half a million freelancers as if they are employees, but without giving them any rights at all.

‘HMRC was given an additional year to get this right and prepare the market, and has failed to do so. This has created a political crisis for the Conservatives, the supposed party of business, who are set to decimate the valuable flexible workforce.

‘With less than eight weeks to go before the legislation goes live, there is simply no time for HMRC to fix the mess they have created. There is only one option left for ministers, abandon the proposals.

‘I do not think the government will raise anything like the amount they say they will’.

The average daily rate of pay for contractors is £512 and an estimated 75% have already left their positions or are about to due to unfair assessments, according to research from inniAccounts.

This sudden increase of contractors leaving their jobs could see the economy face a £2.2bn productivity gap in the first half of 2020.

HMRC expects the changes to the off-paywoll working rules to impact 170,000 freelancers and 20,000 agencies who provide workers to medium and large-sized organisations.

After the demonstration, campaigners planned to deliver a letter to the Chancellor, Sajid Javid, at No 11 and then meet with MPs to discuss the issue.

Find out more about Stop the off-payroll tax campaign

Critics protest too much?