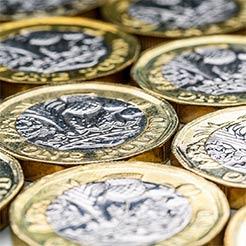 The new pound coin is going global, with Britain’s overseas territories and Crown dependencies set to design and mint their own versions of the 12-sided £1 coin for the first time since it was introduced in 2017

The coins are expected to feature images celebrating the heritage of these territories, with their history and culture pictured on the reverse side. The Treasury says it believe this will symbolise the close links between the UK and its territories, as well as offering improved security features in the local coinage.

The new £1 coin, introduced in 2017, is designed to be the most secure of its kind in the world. Many territories and dependencies have coins based on older versions of UK currency and they will now have the choice to switch to this cutting-edge technology.

Robert Jenrick, Exchequer secretary to the Treasury, said: ‘The Great British pound is internationally recognised and as we extend the new £1 coin to our territories and dependencies, we will see new designs emerge that together symbolise our shared history.

‘In the same way that the rose, leek, thistle and shamrock are used on our coin to represent the four nations of the UK, these new designs will reflect the rich and varying British communities across the world.

‘From the Falklands to Gibraltar, this move sends a clear message of our unshakeable commitment to our territories around the globe.’

Currently, many of the UK’s territories and dependencies use their own versions of the pound which are pegged against pound sterling.

To produce their own 12-sided £1-coin, overseas territories and Crown dependencies will inform the Royal Mint, who will ensure that the same security standards are met before approving and supplying them with the necessary blank or struck coins.